Menu
Back to all

Seven Added to Alabama Business Hall of Fame for 2021 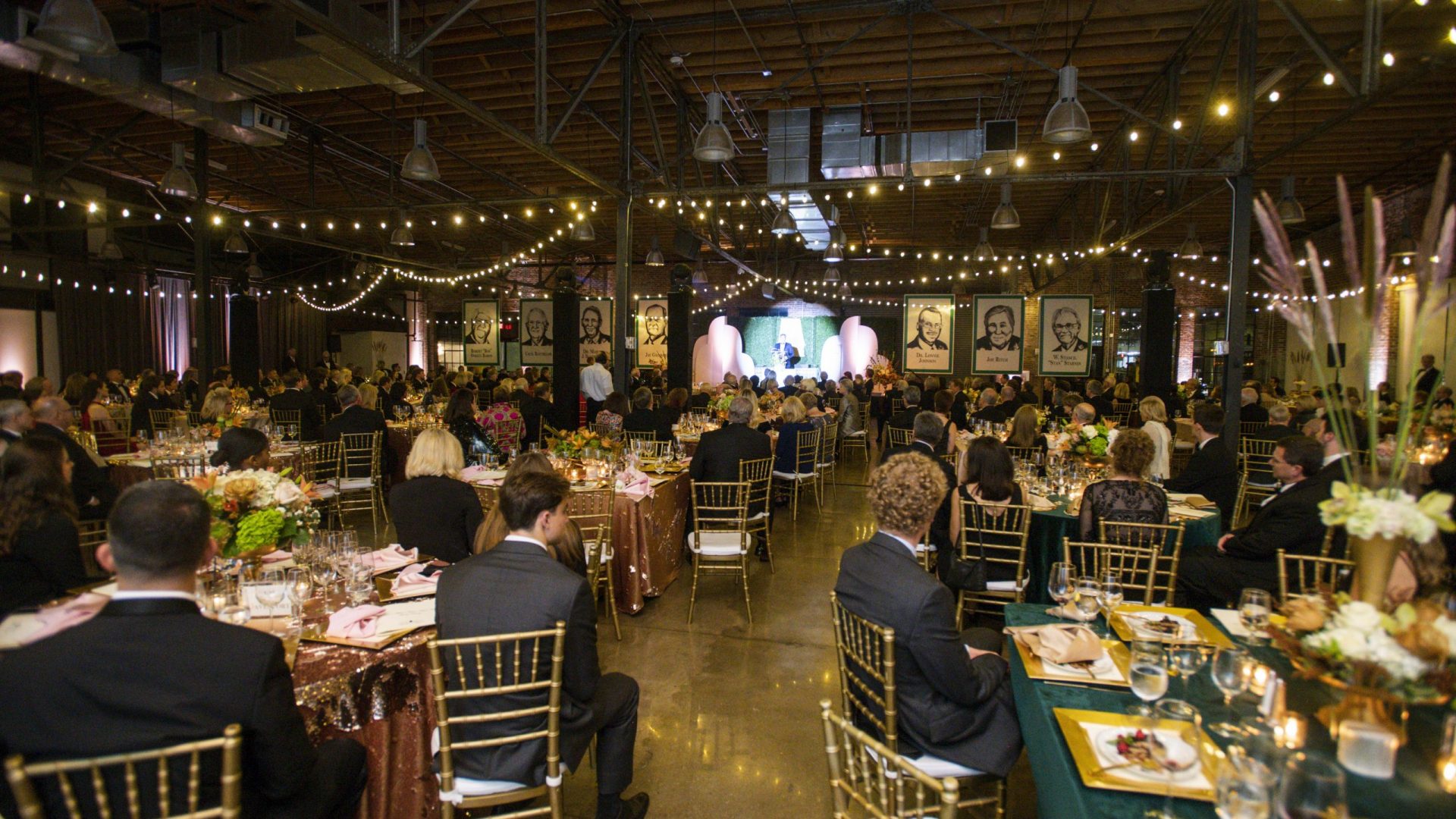 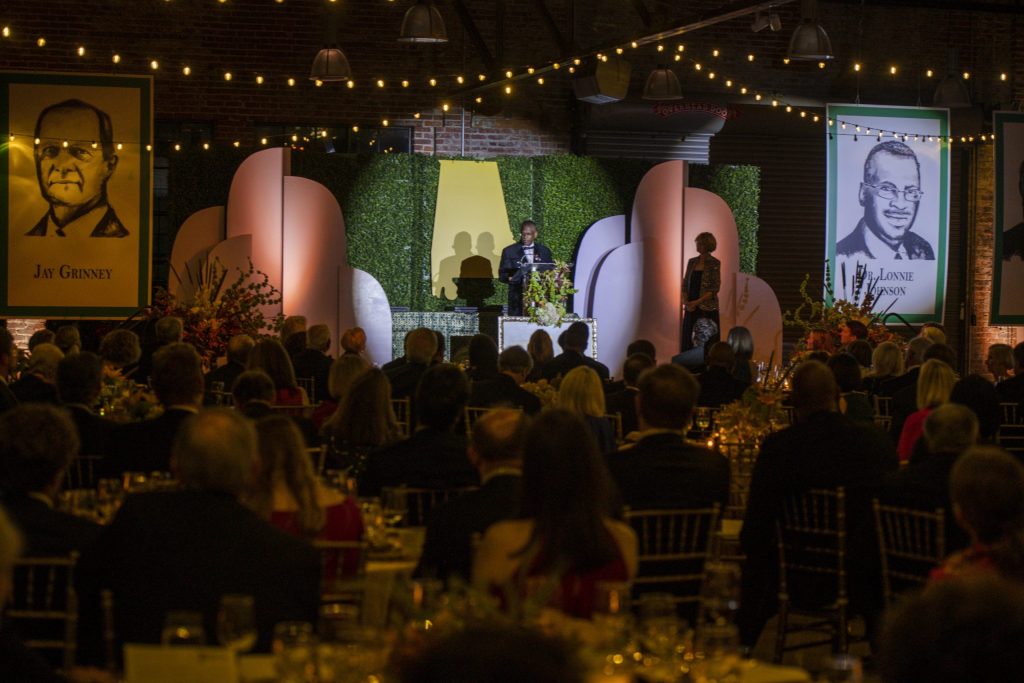 “Growing up as a child in Mobile in the Civil Rights Movement, being here and receiving this award just means a lot to me.” –– Dr. Lonnie Johnson, innovator, inventor, and Alabama Business Hall of Fame inductee for 2021, speaking at the podium.

TUSCALOOSA, Ala. — The Alabama Business Hall of Fame inducted seven new members for 2021 in a black-tie ceremony October 7 at Haven in downtown Birmingham. The event, originally scheduled for 2020, was delayed to 2021 due to the coronavirus pandemic.

The Alabama Business Hall of Fame recognizes those who have brought fame and honor to the state of Alabama through not only their achievements as business leaders and entrepreneurs, but their ardent commitment to civic leadership, philanthropy, and humanitarianism.

All inductees are heavily committed to their communities, serving in leadership roles on boards, donating their time and resources to causes, and inspiring future generations of business leaders.

Now in its 47th year, the Alabama Business Hall of Fame is in Hewson Hall on The University of Alabama campus.

Members of UA’s Culverhouse College of Business staff and a board representing the Culverhouse Board of Visitors, former inductees, other Alabama institutions of higher education, and Alabama businesses, coordinate the Hall of Fame selection process and planning of the induction ceremony. 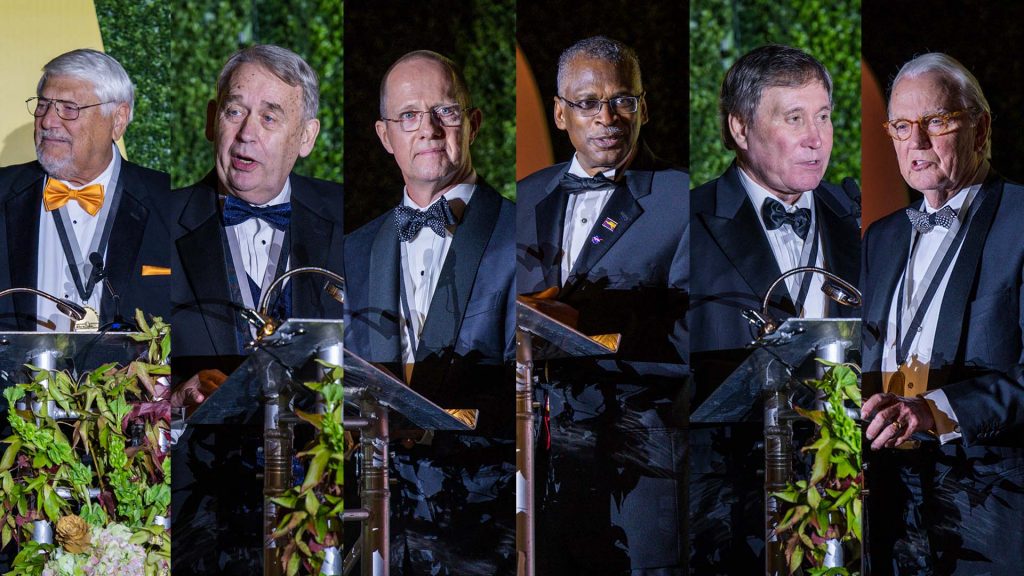 The 2021 inductees included the following people, all of whom have deep connections to the state of Alabama:

Robert O. “Bob” Baron: Bob Baron is the CEO and Founder of Baron Weather, an industry leader in weather forecasting and warning systems. He is a graduate of the University of Tennessee and was named Entrepreneur of the Year by UT’s Haslam Business School in 2011.

Cecil Batchelor: Cecil Batchelor was the Chairman of CBS Banc-Corp and Chairman Emeritus of CB&S Bank, based in Russellville, Alabama. He was deeply committed to the community of Russellville and was twice-honored as that city’s Citizen of the Year and was a 72-year member of the local club of Civitan International.

Dr. Marcus Bendickson: Dr. Marcus Bendickson is the retired CEO and former Chairman of the Board of Dynetics, Inc., a leading provider of high-technology, mission-critical services and solutions to government and commercial customers. Throughout his career, he has advocated for the benefits of employee stock ownership plans or ESOPs.

Jay Grinney: Jay Grinney is the former President, Chief Executive Officer, and Director of HealthSouth Corporation, now known as Encompass Health. He led the company through a highly successful turnaround effort that increased shareholder confidence and led to a period of unmatched growth.

Dr. Lonnie Johnson: Dr. Lonnie Johnson is a lifelong serial entrepreneur and innovator. Growing up in Mobile, his innate scientific curiosity led him down a path that would include inventing advanced defense and aerospace technologies as well as the Super Soaker water gun. He is an ardent supporter of youth STEM programs.

Joe Ritch: Joe Ritch is an entrepreneur and attorney in the firm of Dentons Sirote and a civic leader who has done much to elevate the Huntsville area. Among many prominent roles, he has chaired the board of the Tennessee Valley Authority, or TVA, the first Alabamian in the organization’s history to do so.

Stancil “Stan” Starnes: Stan Starnes is the executive chairman of ProAssurance Corporation, and was its CEO from 2007 to 2019, and president pro tempore of The University of Alabama System Board, representing the Sixth Congressional District. He is also an extraordinarily accomplished lawyer, named among the country’s best for over 20 years.

The award of inductee Mr. Cecil Batchelor, who passed away on August 17 of this year, was accepted on his behalf by his children Rebecca Reeves and Greg Batchelor, who said of his father’s induction to the Alabama Business Hall of Fame, “He was so proud to be associated with such a prestigious group of people.”

Read longer bios about all the inductees here.

Phil Smith, the Chairman of the Hall of Fame Board welcomed attendees to the event and Dr. J Gorman Houston provided the invocation. Dr. Kay M. Palan, dean of the Culverhouse College of Business, introduced each inductee to the stage.

A number of former inductees and University of Alabama System Board of Trustees attended as well.

See and download photos from this year’s Alabama Business Hall of Fame here.

To nominate someone to the Alabama Business Hall of Fame, contact Courtney Miller at cmiller@culverhouse.ua.edu. The criteria are:

Alabama Business Hall of Fame to Induct Eight for 2022

TUSCALOOSA, Ala. — Established in 1973 to honor those individuals that

Seven Named to Alabama Business Hall of Fame for 2021

Established in 1973 to honor those individuals that have brought